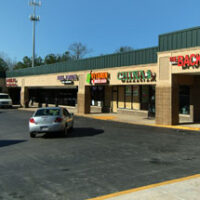 BDG contracted to purchase this 115,000 square foot retail center from a banking institution in the mid 90’s. The center had languished due to poor visibility and maintenance. BDG developed plans for grading the site to improve exposure and to recapture a valuable out lot. Plans for a renovation of the center were developed and several new tenants were identified for the vacant space. As a result of these efforts, BDG sold the package at a significant profit.