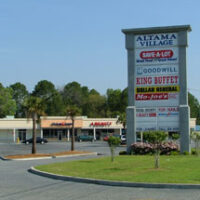 Altama Village is a 75,000 square foot retail center located near the Georgia coast. Prior to BDG’s involvement in the mid 90’s, the center suffered from a burdensome debt structure, the expiration of its anchor tenant’s lease and an obsolete appearance. BDG helped arrange favorable refinancing and lead a cost-effective renovation of the center. The vacant anchor store was divided and leased on more favorable terms. Ultimately, the Owner was rewarded with substantial increases in cash flow and a profitable sale.